How can we help?
Solution home Topics Course Content Development

Video Speed Control and the science behind it

This Video Speed Control feature comes both with our standard and our new video player (learn more here) and is compatible with all skins. 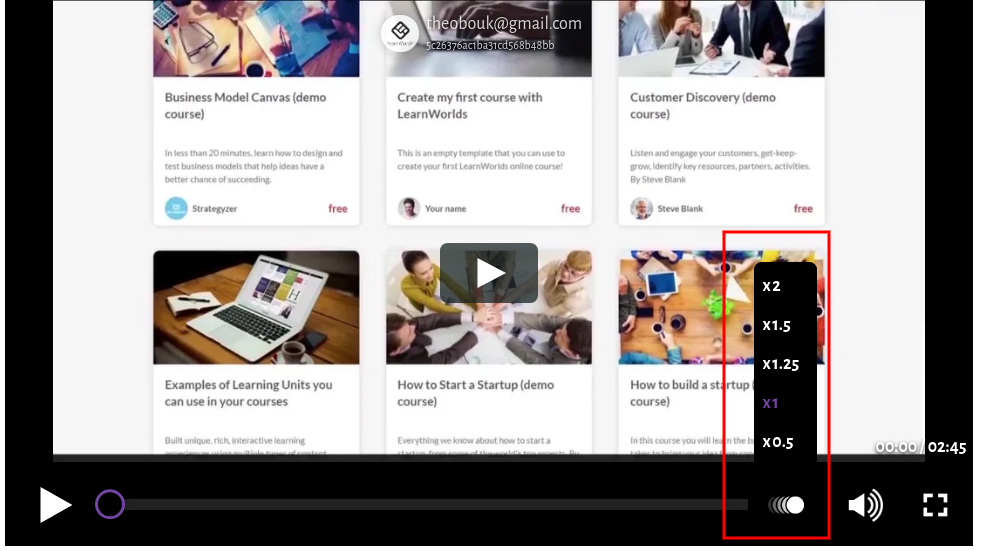 Controlling the Speed of a Video

Learners are always excited to use time-hacking methods, especially for content that doesn’t require much attention. One feature that can be really beneficial for them is the ability to change the playback speed of a video.

When users can change the speed of presentation they can save lots of time in specific portions of the video (parts they have visited before, are simply those that are less interesting than the rest of the content).

Video speed control provides also a much more active consumption of the content. That’s why control of speed is scientifically proven to result in higher learner satisfaction and also better performance.

An important fact that makes learners want to save time is that on average, podcasts, conference talks, and video tutorials are spoken at around 150 words per minute, while the regular human reads at 250 words per minute. This is an indication, according to neuroscience, that our brains process information much faster than we can speak. So, many users just can’t stand the slowness of a presentation or speech. Also, due perhaps to their impatience and lack of free time, they often practice at the so-called “speed learning” using speed control possibilities.

20% faster is something we can really adapt to without a dip in comprehension. And imagine how much time is saved on the course of a day if videos that we watch are played at 1,2x. instead of 1x. In a recent study, findings showed that learning was not adversely influenced at 1.50x! Research now attempts to identify the ceiling at which cognitive resources are overloaded by the video speed. This will help us to better understand the speeds at which to compress or play instructional videos without sacrificing the learning.

Apart from speed learning, when learners control the playback speed of a video they are more able to adjust video watching to their individual needs instead of a fixed sequence and pace of information presentation and so their mental activities are less constrained by the video design.

For example, when your viewers come across a video that’s a bit redundant or covers a topic that they’re already familiar with, they can simply bump up the playback speed for that portion of the video. Also, the video sequence can be accelerated by the user to get an overview and proceed until a scene of interest appears. For some, especially when reviewing information, it’s helpful to move through it more quickly.

On the other hand, reducing the playback speed may be very helpful, when you’re using the exercise files to follow along, and need some more time to act while listening to the author. This way it is easier to follow the step-by-step instructions. As a designer, a clever idea is to help your learners know when it would be beneficial to slow-motion a video (before a highlight moment) by using a highlight tag. Speeding down the video is also useful if the user wants to take notes from your lecture.

Lastly, don’t worry about warped sound: we optimized the audio pitch for all speeds to ensure viewers have an optimal viewing and auditory experience.

How can your students take advantage of it? They can simply hover their mouse over the Video Play Speed control (double arrow) which can be found at the bottom right corner of a video. A little menu will pop up and from there they can choose the playback speed that works best for them! 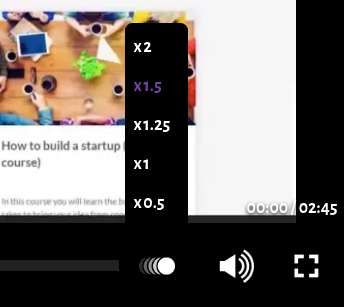 Did you find it helpful? Yes No

Send feedback
Sorry we couldn't be helpful. Help us improve this article with your feedback.
❰❰ Back to home